Interesting things to do when coming to Hoi An.
Hoi An is an ancient trading port located in Central Vietnam. It is flourished in the early 16th...

Phong Nha Cave - Dark Cave by boat
OVERVIEW
Phong Nha Cave - Dark Cave Boat and Bike Tour starts between 08:00 AM & 09:00 AM.
participants will be picked up by a tour van from the Heritage By Night Hotel and brought to the boat station at the PhongNha-Ke Bang Tourism Center ticket office.
At the boat station a traditional Vietnamese dragon boat will be waiting and drive them on the Son river to the entrance of the PhongNha Cave. The Son river is not a regular river, it is a river of which origin is located underground.
Once arrived at the PhongNha Cave’s entrance it’s time to venture inside the big gazing hole (entrance) and explore the cave by boat. The PhongNha Cave is not a regular cave, it is the longest subterranean river system and longest underground river cave in the world and also known as “The First Wonder”. It opened up for tourism in 1995 and has been the #1 tourism site in the PhongNha-Ke Bang National Park ever since.
The PhongNha Cave is not just a beautiful cave, it also has a rich history and has had many purposes in the past. Inscriptions and old artifacts are found inside the cave. These belong to to the Cham people who inhabited the area thousands of years ago. This ancient culture had it’s own alphabet which till the day of today still hasn’t been fully decrypted!

After successfully discovering the Phong Nha Cave. It’s now time to sit back and enjoy another boat ride to Dark Cave. This time the boat driver will take participants upstream on the Chay river, another amazing river that runs through the national park.
On the boat ride to Dark Cave two villages will be passed; Cam village & Ne village.
Once arrived at Dark Cave’s boat station it’s time to get geared up for the exploration. Dark Cave was first discovered in 1990 by the same man that discovered the biggest cave in the world: Son Doong.  In 2014 the 400 meter double zip-line was build and since then Dark Cave became one of the most popular tourism sites in the area. During this festival a new Dark Cave tour was launched (6 km Dark Cave exploration) and a new obstacle course above the water was built (the adventurous bridge).
The entrance of the cave is located near the end of the zip-line, a short 20 meter swim is required in the cool emerald green sometimes blue water of the Chay river. While venturing deep in to the cave our professional English speaking tour guides will provide visitors with plenty of information about the cave and its history. At the end of one of the narrow passages there’s a natural mud-bath waiting and we assure that it’s a lot of fun! There’s more to the cave than just the mud bath. It is home to many different lakes and ancient fossils are forever embedded in to the rock walls of the cave. With it’s stunning length of 6 kilometers.
HIGHTLIGHTS
ITINERARY 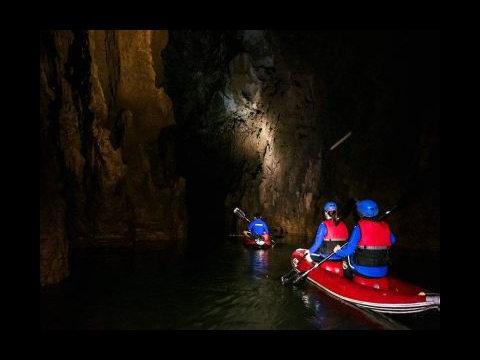